I recently gave in to family tradition: I'm originally from Bologna, home of Ducati and heart of the Italian "Motor Valley", so sooner or later I had to buy a motorbike (or two, but nevermind). 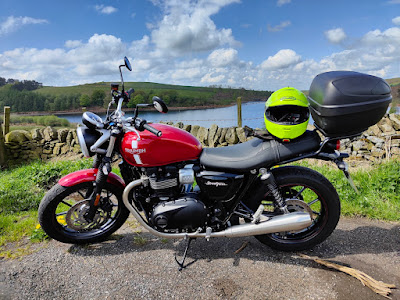 As the main workhorse I went for a 2018 Triumph Street Twin, because it's practical but still fun, fairly cheap, and simply beautiful. I love it to bits, but one thing I really missed: a tachometer ("rev counter"). While trying their hardest to segment the Bonneville range, Triumph clearly thought that people would pay a few grand more and get a Speed Twin just so that they could see RPMs. It took them about 4 years to understand the silliness of this position (or to produce enough Bonneville variations that nobody cares about that bit anymore), so post-2020 Street Twins display RPMs on the digital display - in a pretty small way, but at least it's there.

So, how could we go about adding a tachometer to pre-2020 models? Various web searches produced a few different methods, with a number of pitfalls. There are a few electrical schematics floating around, but I'm not good at that sort of thing and comments seemed to be that they are easy to get wrong.

A much easier method is to attach an OBDII ("OBD2") reader to the related port, which is available under the seat. 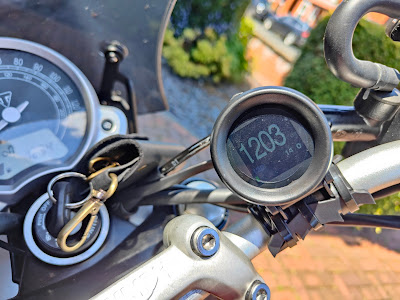 OBDII is a standard interface for debugging systems in vehicles; it's recently been mandated by the European Union, so it's available in pretty much any vehicle produced in the last decade or so. Once you connect a reader, you can see a wealth of information about the vehicle, from fuel consumption to engine load to pretty much any sensor available... including RPMs! So that's how we can get a tachometer without effectively modifying anything in the bike itself.

There are two ways to show the extracted information: wired, and wireless. Each comes with pros and cons. 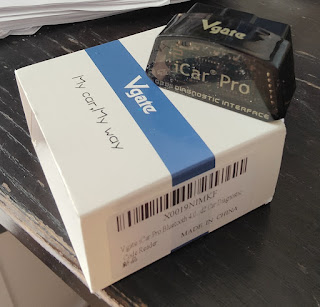 Wireless is less intrusive but fiddlier: a compact reader stays entirely under the seat, and communicates with a phone or tablet over Bluetooth (as far as I know, there are no dedicated wireless displays). It's described in this Youtube video, and the dongles are easy to find on Amazon. As a permanent solution, it suffers from lag and the requirement that the phone screen stays on all the time, set on the specific app. (Side note: I found the best iOS app to be FourStroke - most of them are focused on cars and might not even work with cheap aftermarket readers.) I have an old phone I mount on handlebars, but I typically want to use it to display GPS stuff and play music, so that just didn't work for me. You also have to manually open the app and connect every time, after you start the bike, which is annoying.

A wired solution, on the other hand, requires a bit more setup, but you do it once and that's it, you don't have to worry about it ever again; readings are a bit less laggy (although still not as quick as hardware ones), and leave your phone free to do other stuff. They typically also feature hardware controls, which are easier to use with gloves than touchscreens (yes yes, I have modern gloves - in practice, they are still too big to be precise).

There are a few OBDII readers on the market, largely meant for the car market. I grabbed this cheap thing from AliExpress, but there are equivalents on Amazon and so on. Setup is trivial: you connect it to the port, turn on the bike, and it just works, letting you choose what to display. You turn the bike off and the display shuts down automatically, so your battery is not drained. Nice!

Finding a location for the wire is basically the same as for the USB you also find under the seat; if you've wired it up to a handlebar mount for phones, as I have, you can basically do the same - it's actually easier here, since you can push it further back with the other cables. 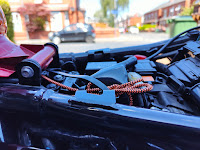 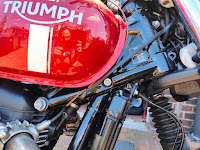 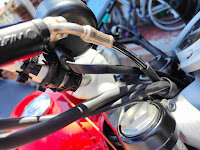 There are a few annoyances though, due to the fact that this is fundamentally a product for cars:

All these issues could be solved if manufacturers started making readers dedicated to the motorbike market. I hope that happens at some point, because it would be awesome - it would free consumers from the tiranny of OEM displays.

Last bit of advice: while you're testing, be careful with your dangling cables! As you can see from the pic below, I mistakenly left mine over the exhaust for a few seconds and... well. Amazingly, it still works! 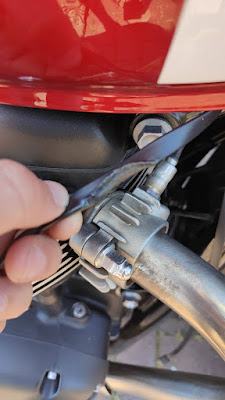